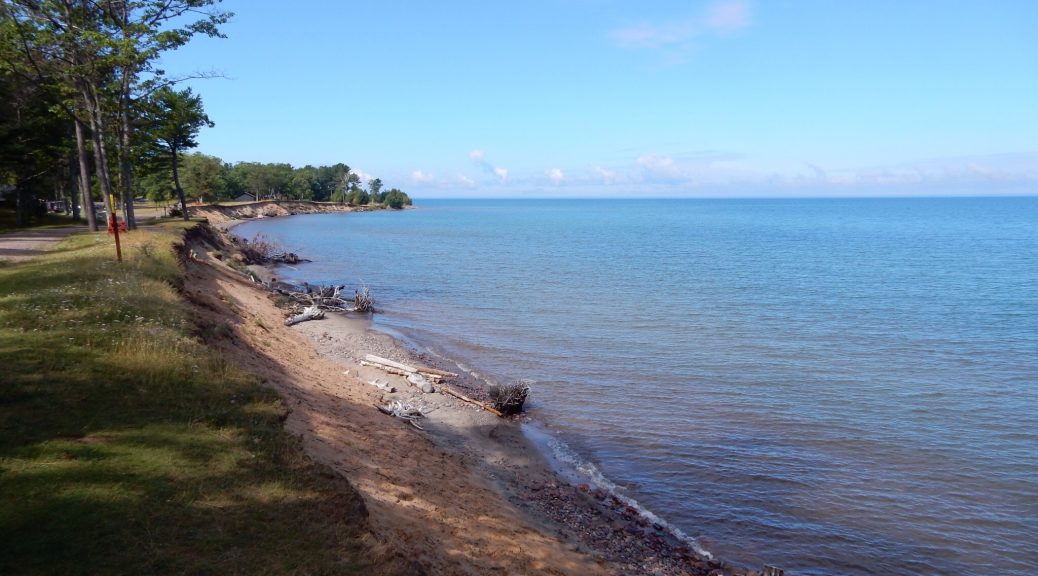 After a lazy morning and indulgent brunch, I had a long afternoon and evening to get in the day’s requisite miles.

The morning started with drama. Not for me, but for the toddler boy in the campsite across from mine at McLain State Park. He was having a fit at 7:20am and his parents apparently adhere to the “just let him cry it out” school of parenting. After about 10 minutes of shrieking terror, a booming voice emerged from one of the other campsites, “Shut that f—in kid up!” This did, finally, lead to parental intervention, but I was already pretty wide awake.

I checked today’s weather and attempted to doze a bit longer, but my mind was already working through the details of the day. After a quick shower and a tear down of my tent and gear, I was almost ready to head out when I decided to write up the previous day’s events.

Being a total geek, I was able to form a blog post, even with pictures, using my Nikon camera, Apple’s Camera Connection Kit, my iPhone and my iPad. The iPhone was the only thing that had a network connection (cellular). The iPad had a bigger screen, so it’s easier to write with, but it’s a WiFi only unit and needed to tether to the iPhone to get a network connection. While the iPhone takes decent photos, my Nikon has a 30x optical zoom and much better resolution, so it is my main photography gadget. Consequently, any photos that I want to incorporate into my blog posts need to be imported to the iPad from the camera first. Enter the Camera Connection Kit, which is just a SD card reader that connects to the iPad.

By the time I was done with the blog post, the cloud cover had almost completely cleared, allowing some sunshine to make the Lake Superior coast look much more inviting than it did the evening before.

Those who read yesterday’s post, Going with Your Gut (literally), remember that the entire reason I came up to the UP on my way out west was to have breakfast at the Suomi Bakery (actually, Suomi Restaurant now). Well, that breakfast turned into brunch since I took so damn long to get my ass moving this morning. I finally walked in the front door a little after noon, sat at the counter and proceeded to inspect the menu, which took all of about five seconds.

My favorite dish here back in the 1980s was the Pannukakku, which is a custard filling in a light pie shell, baked in an oven, and served with (usually) raspberry preserves. For me, it’s like having creme brûlée as a main course instead of dessert. The dish came with cinnamon toast and, for me, a side order of bacon. Finnish cuisine may not float everybody’s boat, but I find it nice to indulge in from time to time.

With a sated belly and the day becoming more lovely by the minute, I took a moment to take a few photos before heading out on the road.

The objective today was to get to North Dakota, which meant exiting Michigan stage left (west) and crossing northern Wisconsin and Minnesota. Due to the late start, this was going to be a bit of a challenge since all of it was going to be on well-traveled two-lane roads, few of which you want to be on after dark on a motorcycle (i.e., deer festival).

The trip out of Michigan was uneventful, aside from the fact that the scenery was great, especially when viewed under a blue sky with lots of picturesque fluffy white clouds. Disney animators couldn’t have drawn a day much better than this. While yesterday started hot and humid and enter cold and damp, today’s ride started at about 68ºF (20ºC) and slowly increased to about 80ºF (27ºC) in the late afternoon in Minnesota. I didn’t even need to open the vents in the jacket.

I’m a bit of a boat nerd when it comes to Great Lakes freighters, so any trip along the coast in Duluth is interesting for me. While I didn’t stop for any photos (remember the late start), I did manage to count seven ships docked at the various ore, freight, and grain docs in the harbor. Very cool.

After my first gas stop west of Duluth, I settled into a pattern of cruising through the northern Minnesota woods, passing the occasional car, and slowing down for the odd town. With the Nightowl, most passes could be achieved by simply rolling on in top (6th) gear. I was, however, suprised once when a car appeared over the hill ahead of me and I needed a little more blessed-mother-of-acceleration to finish the pass at a safe distance. Instinctively, I downshifted into fifth and opened the throttle with authority. At this point, a few very interesting things happened:

While I did expect the bike to accelerate (duh), I didn’t expect it to be quite that authoritative. Not that I’m complaining. That accelleration allowed me to complete the pass with gobs of room to spare (I doubt the oncoming driver even took his/her foot of the gas). The experience did leave me to ponder exactly what had just happened in terms of the bike’s dynamics.

At first I was puzzled over the appearance of the traction control light. I had no indication that there was my wheel slip. On the contrary, the rear end was solid as a rock. The only change was the front end raising on the suspension a tad.

Oh, the front end came up on the suspension a bit. I remembered reading in the manual that the traction control would step in if the front wheel lifted.

Damn, I love this bike!

Even if there was no physical possibility of picking up of the front wheel in these conditions, it’s still fun (to me) that the bike’s electronics were prepared for the situation.

I crossed the Red River (of the north) into Grand Forks, ND at just before 8pm Central time, having gained an hour after leaving the Eastern time zone. The sun was still about 40 minutes from setting and I had another 90 miles (145km) to travel to get to the next decent-sized town: Devils Lake. A quick inspection of the online map revealed no campgrounds in Devils Lake, which seemed strange, but there were plenty of less-than-luxury motel establishments. More importantly, there were at least two restaurants, Pizza Hut and Applebee’s, that would be open until at least 10 or 11pm… just in case I wanted dinner this evening.

I had left the nearly endless forests of Minnesota behind about an hour ago, as the rolling terrain ended and the plains opened up. Now, the combination of open plains, clear sky with scattered clouds, and the oncoming sunset compelled me to push on to Devils Lake, just to enjoy the sunset.

Another change that comes with the Great Plains is an increase in allowed speed limits, which afforded a slight increase in pace in an effort to beat the closing of the aforementioned eating establishments.

The sunset did not disappoint. Since the cloud cover was at varying altitudes, their coloring changed dramatically as the sun lowered in the sky and finally disappeared. Naturally, the high wispy cirrus clouds held onto the sun’s rays the longest, maintaining a pink ceiling over the plains before fading to fuchsia, purple, and finally to grey. As I was approaching Lakota, ND, a nicely mottled pink/purple cloud formation created the backdrop for a sillhouette of a grain elevator, with the adjacent railroad tracks reflecting a bright pink/orange in contrast to the darkening landscape. I really should have stopped for a photo, but the road turned and the serendipitous viewing angle changed. I stored the image in my memory and rolled on.

I arrived in Devils Lake just in time for the bugs to rise into the night sky for… well, whatever bugs fly around at night for. From my perspective, their only motivation seemed to be to commit suicide on the Nightowl’s windshield. It’s going to be a bitch to clean them all off in the morning.

I was able to secure a bed in a decent hotel, one that had a pool/spa, which only matters to me because I was a little chilled and would want to soak in the hot tub before they closed it at 11pm.

I grabbed a quick late dinner at the aforementioned Applebee’s. While I ate I saw not one, not two, but four vehicles use the coin-operated 24-hour car wash on the other side of the main drag. I don’t see 24-hour car washes in cities, so I’m wondering why they are needed here in the middle of nowhere in the Dakotas. Possibilities include:

Oh, and the bug problem here is the real deal. As I suited up for the ride back to the hotel, a pickup with an industrial bug fogger was idling along the city streets like a street sweeper.

I made it back to the hotel for a 15 minute (15 minutes in metric too) soak in the hot tub. Then it was back to the room to call Karen, write up the day, and get some sleep.

Tomorrow I’ll see how far I can get into Montana.