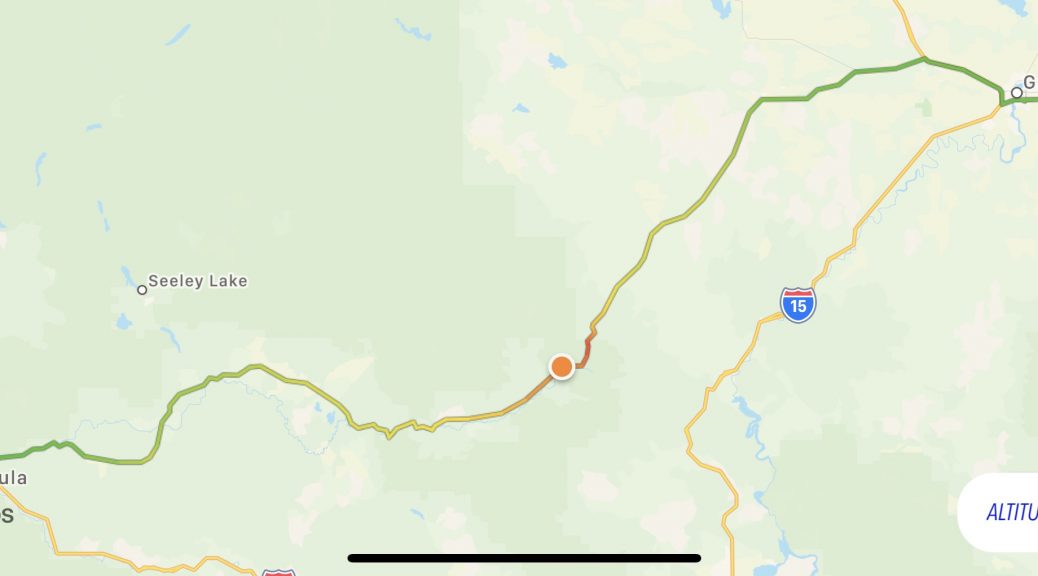 Bad luck prevents me from getting a reasonable start down Montana highway 200. By the time I get to Missoula, the remaining route is drowning in rain and wind. Decisions…

The alarm went off and I woke up groggy and tired, probably because I’d stayed up until 3am writing trip reports.

I get dressed, mostly, and plod down the two flights of stairs to check on breakfast. This hotel is doing the “breakfast bag” thing because of Covid and there isn’t anyone at the front desk to fetch one for me anyway… so no breakfast.

I trot back upstairs and shower, pack up, and answer some online messages. I also check the route ahead of me and see that there’s some rain moving along MT200 right now. It should be by in a couple of hours, so if I leave now I may get a little wet but I’ll pop out of it.

And then my morning got complicated…

I pack the Nightowl. I was reviewing the dashcam’s memory card last night, so I have to reinstall it. The damn card (micro SDXC) goes in croooked and won’t come back out. I try tweezers, but won’t come out. I try needle nose pliers, and the end of the card breaks off.

I’m forced to partially disassemble the dashcam unit to loosen the card and remove it. The last few millimeters of the card is broken off about 3/4 of the way across the end of the card, away from contacts.

Surely it will still work; it will just be ugly.

I reassemble and reinstall card straight this time.

The camera can’t read from the card.

I hope none of you were hoping for my promised highlights videos of the Chief Joseph Scenic Byway and Beartooth Pass.

Now I have something else to try and find in Great Falls: a high-speed 512GB SDXC card. Anybody want to take odds on my success?

I stop for gas. Before I fill up, I check the Nightowl’s miles to empty; that should be enough to get to Missoula, so screw gas.

Now I’m looking for source for the mangled SDXC card. The geeks at a Verizon Wireless store say unlikely to find that high speed a card in stock in Great Falls. Perhaps in Missoula, so screw the card.

Now I stop at the hardware store and pick up split rings for jacket zipper repair. Done in 10 minutes. Finally, some success.

The plan was to take MT200 to Missoula and get through Lolo Pass before the late afternoon. I don’t like to ride Lolo when the sun gets too low. I did that once (the first time, going west) and all those curves constantly running me from bright sunlight and glare to dark shadow made it hard to gauge my turn speeds correctly. I want the sun high in the sky (or behind clouds) for this passage. With this late a start, I should still be able to pull this off, as long as there aren’t any other delays.

The Ride to Missoula

I point the Nightowl out of town and onto MT200, which uses I15 for the first 10 miles or so. The good news is that I’m making good time. The bad news is that I have strong winds in my face. I have my purple flannel on under my jacket but I’m chilly anyway because it’s only in the mid 60s F. So far, the scenery is wide open farmland with a few distant hills to the south and west. It’s not very scenic. I may have chosen this route in error.

A few miles after leaving I15 on MT200 proper, the road turns south towards what looks like rain. The winds keep up and the ambient temperature gets colder.

There’s no reason for me to be this cold. I stop on the ramp into a farmer’s field to lose the flannel and put on Gerbings heated jacket liner. I also swap my perforated gloves with the Gerbings heated gloves. I crank up the temp and get back on the road.

After about 30 minutes of travel, the scenery around MT200 is getting more forested and mountainous. I’m starting to like this route more.

There’s clouds over the higher mountains at Rogers Pass, causing a mist that’s visible on my windshield. The ambient temperature is down to 50ºF but I’m fine in my Gerbings.

All that headwind earlier in the ride has sucked a lot of gas and depleted my range. I may not be able to make the MT200 / I90 interchange and that’s assuming that there’s gas there because I don’t know.

Further down MT200, northwest of Helena, I find myself retracing some early (late 90s) Sunrun miles. A lot has changed; it’s more built up, especially at the intersection with MT83 towards Swan/Seeley.

The further I go, the less it looks like I’ll get to I90 on the gas I have remaining in the Nightowl’s tank. I officially decide to stop at next gas that appears. Based on the mileage figures, I’m actually doing pretty well on gas now that I’m out of the wind and going up and down the mountains in central Montana, but there simply isn’t enough distant left in the tank for these improvement to make up the difference.

Then, there by the side of the road, is Cully’s Store, complete with gas pumps. Blessed salvation. I was beginning to think that running out of gas was going to the icing on the cake of this day.

I finish the ride into Missoula. Looking southwest towards Lolo, the sky over mountains is really ominous. I haven’t eaten yet today and it’s almost 3pm. I’ll get food and check the weather conditions.

Author’s note: There was gas at the MT200 / I90 interchange… but I would have never made it that far. Thank you Cully’s.

In need of serious comfort food, I pull into an IHOP for my late lunch. As I walk inside, the rain begins; not bad timing.

Inside the IHOP, there are signs everywhere warning that service will be slow because they’re understaffed. Fine. Given the weather, I may not be in a hurry.

After riding my strawberries and cream crepes and a side of bacon, I consult the BestBuy website and there’s a candidate SDXC card right here in Missoula, and it’s on sale.

Things are looking up.

Then I consult the weather radar.

So much for things looking up.

It’s wet and windy on the western slope of Lolo Pass and there’s a wide line of rain passing along that region that won’t be gone until the wee hours of the morning. Tomorrow’s may still be a little wet in the morning, but improving over the course of the day and a lot less windy.

As I look outside and ponder my options, I notice that the trees beside the parking lot are half blown over. There’s some serious wind out there now. I check current conditions at Missoula airport: 30mph winds out of the north.

Screw this. I’m on vacation. I can get from Missoula all the way to the Par-Tay in one day if I haul ass, and I have three more days to play with.

A check of local hotels reveals high prices and low availability. The best option is still fairly egregious at $146. I book it anyway. It’s across town, over by the University of Montana, but it’s only a few miles.

My food finally arrives and I eat, knowing my day is done.

On the way to the hotel, I pilot the Nightowl over to Best Buy to check out the SDXC card they had on their website. They have the card and it’s a minor upgrade to the card I destroyed this morning. I get it installed and tested without losing any parts to the wind whipping across the parking lot. The dashcam work great with the new card.

I ride over to the model to check out my humble abode for the evening. It was described as an “efficiency queen” room, which means a queen bed and little else. With the nice new laminate floors, the lack furnishings makes it echo in the room when I talk to myself.

After checking in, I sit down and start catching up on ride reports. That kills enough time that I’m hungry again.

I walk down to a suggested dinner venue from the hotel receptionist. It’s totally dark; closed. I try the Subway sub shop next door, they’re lit up and the door is open, but they closed 10 minutes ago. I finally give up and walk back to the Pizza Hut that was right across the street from my hotel. The dining room is locked; they’re carry out only. I stand outside and place an order over the phone; just a small Supreme pizza (but they’re out of onions) and a 20oz Diet Pepsi. They say it will be ready in 15 minutes.

I walk back to the hotel and get back to writing trip reports. The 15 minute timer I set goes off and I wander back across the street to pick up the food.

The waitress apologizes for the mixup.

They took down my order correctly, but made me a large pizza instead of a small. They charge me for a small.

There’s no way I can eat all this pizza.

On a lark, I post on Facebook that I have extra pizza and anybody I know is welcome to join me at the hotel room.

I crack myself up sometimes.

Here’s a map of the abbreviated day’s ride with an altitude overlay. I’ve taken longer (much longer) day rides. (sigh)

Tackle Lolo Pass on press on into Washington state.