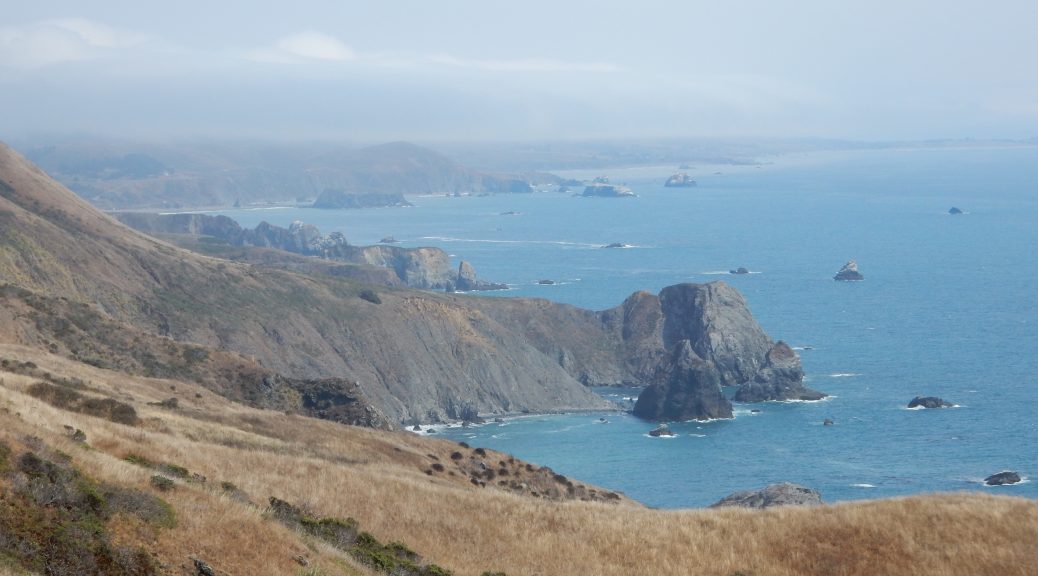 For the first time in 20 years, I found time to ride as much of the west coast as possible. This post covers the first day (actually the last half of that day).

After a three-day blast from Kansas City to a small town near Lodi, CA, I was within striking distance of the west coast. The day started by weaving through the walnut groves east of Lodi until I found myself on the I5 headed north. Mercifully, I wasn’t on it long before heading west on CA12.

The first good bit of luck on this day was getting over on of the drawbridges on this highway just before the lights came on to stop and wait for the bridge to raise. I was literally the last vehicle across. As it happened, I need gas right about then, so I quickly stopped in the town west of the bridge and filled up as the eastbound traffic backed up in front of the gas station. If I could finish fast enough, I could get back out on the highway before the mile-long row of cars would flow off the bridge. Getting stuck in the middle of that mess would not be fun (or time efficient), so I was moving with purpose.

That’s when the pump wouldn’t take my credit card.

I had to go inside for it to be scanned an naturally the attendant was clueless as to why it didn’t work at the pump. Back outside I go to hurry through the refuel process before the bridge lowers and the traffic forces me to join a vehicle death march.

I don’t know how much time I had to spare, but I made it out in front of the line of traffic and continued west. It turns out that passing is largely forbidden on this stretch of CA12, so it was even more important that I got out in front of the clusterfuck of bridge traffic.

Heading west on I80, I stopped in a rest area that promised a vista. It turns out this was my first view of San Francisco Bay, albeit the far northeastern portion of the bay. Still, it meant I was getting closer to the coast. 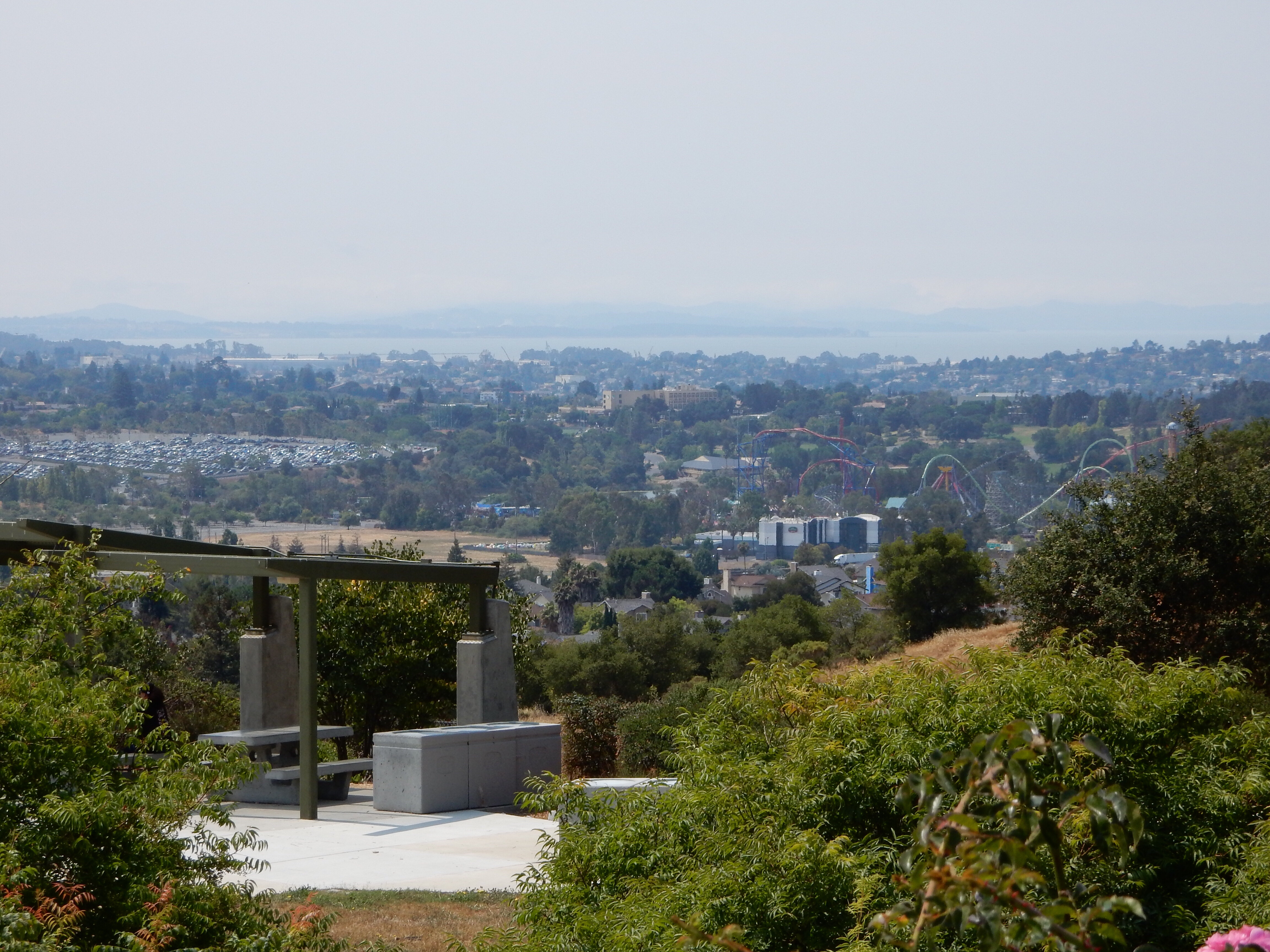 I finally reached the west coast at Bodega Bay at about 3pm, leaving me a decent amount of time to get to my goal for the day: Fort Bragg. I parked the bike, took a few pictures, sent a photo to my wife, and did a quick post to Facebook. These tasks were my way to shift gears from a go-fever mode of riding to the more sightseeing mode that I wanted to be in the rest of this day and the next few days. 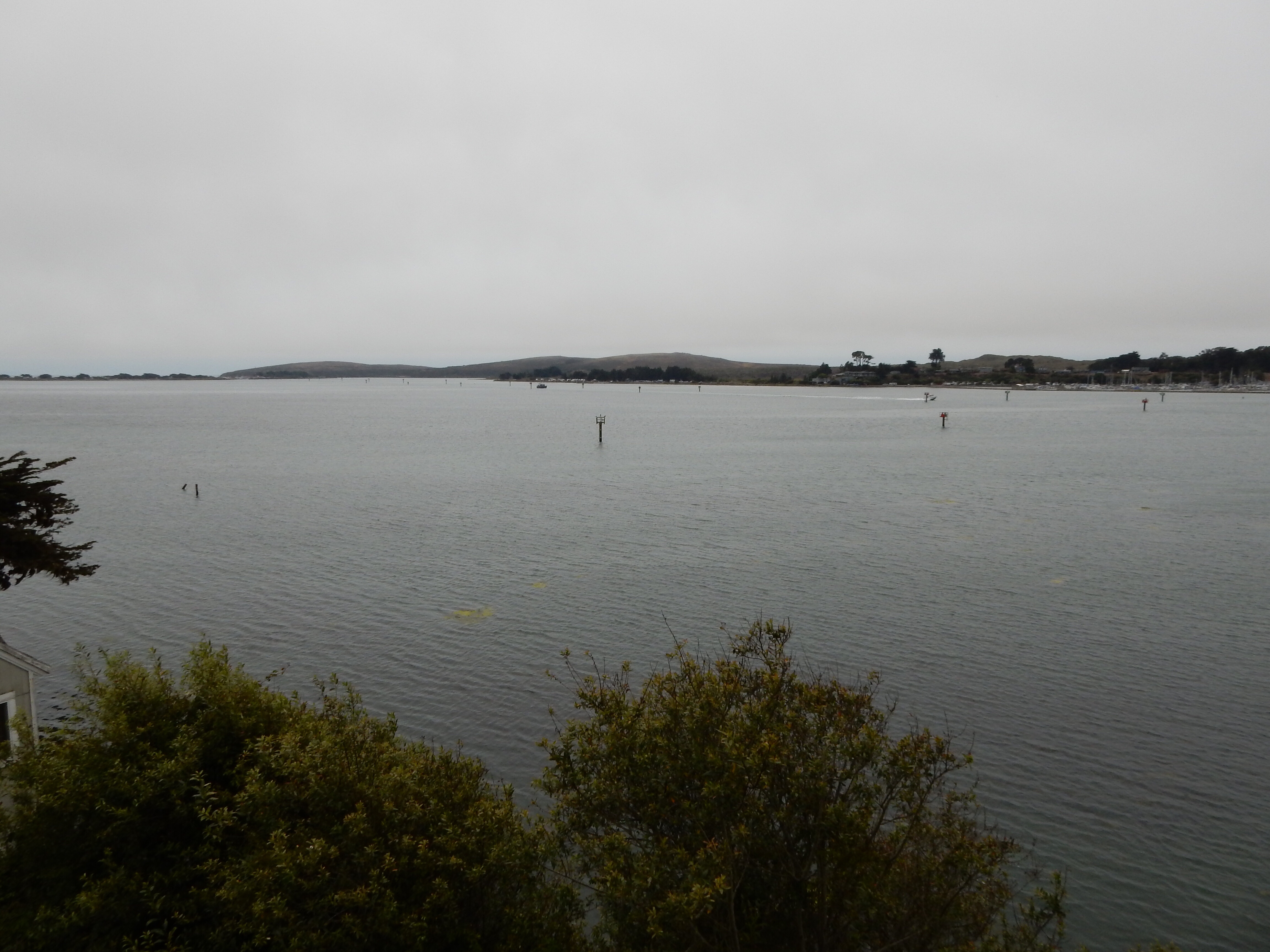 Fort Bragg was the goal primarily because:

I could see the coastal fog even before I reached the coast. All along the coastal mountains, there was a billowing of cloud covering the tops of the mountains, only to dissipate just inland of the range. Consequently, I was riding in bright sunshine only to end up under the overcast when I reached the coast. It can be a bit frustrating, seeing the blue sky inland past the mountains and offshore a few miles, only to have clouds where you are. 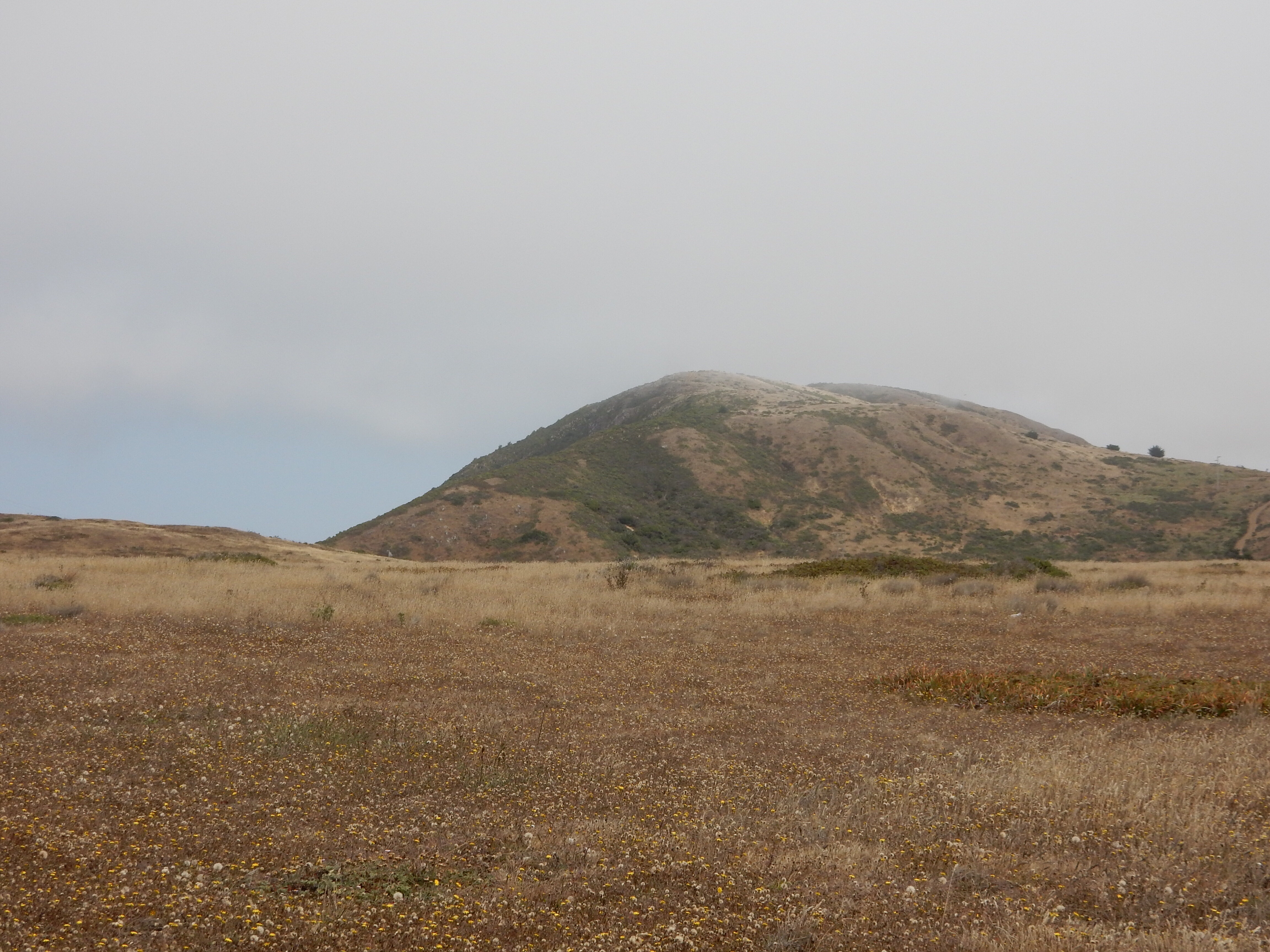 Railing Up the Coast

I spent the rest of the day plying the curves and hills of the Coastal Highway (otherwise known as the Shoreline Highway or California Highway 1). While I was riding in a decided spirited fashion, I was still taking time to stop and photograph some of the available scenery. I must say that I’m increasingly impressed in the capabilities of the Nightowl (BMW K160GTL). It may be 700lbs of touring bike, but it handles well enough that you can easily ignore this detail and rail around corners quite nicely.

After about 20 miles of overcast, the coastal fog burned off and I enjoyed sunlight for a while. Naturally, that prompted more photos. (Note: there’s a gallery of all the day’s photos and the end of the post.) 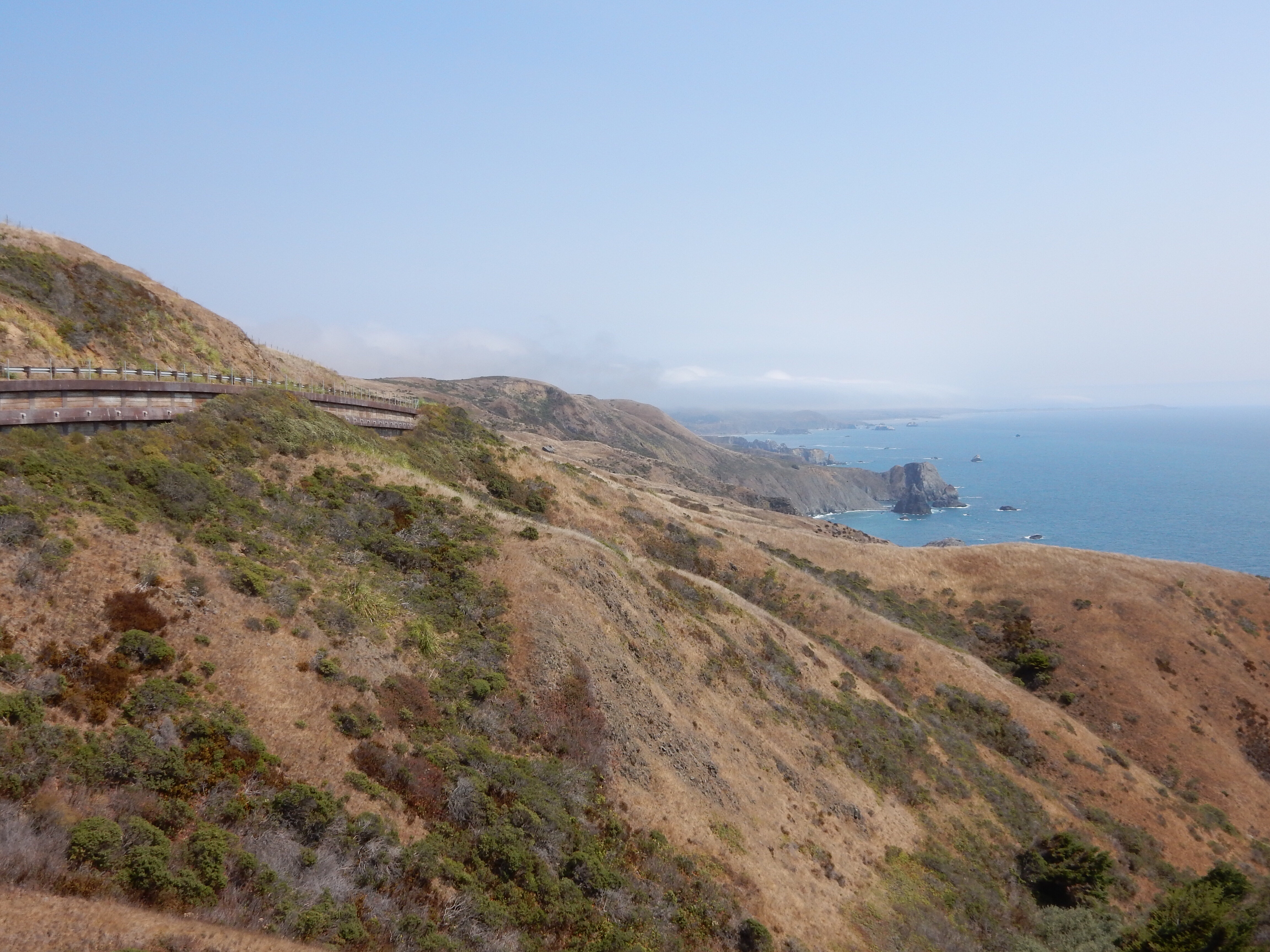 This afternoon’s coastal ride had two big reversals from the previous days:

I arrived in Fort Bragg a little before 6pm. I rode through town, getting a lay of the land, and then stopped just north of downtown to fill the fuel tank. After the fill up, I backed into a corner of the lot to pull out my iPhone and figure out where I was going to stay this evening. As cool as it had gotten, I wasn’t wildly enthusiastic about pitching my tent tonight. I checked my Wyndham rewards app for available deals and nothing seemed low enough in price to be compelling.

The Hotels.com app did find one notch-above-scuzzy motel that was reasonably priced. As a bonus, it was located right across the street from the gas station where I was currently parked.

As it turns out, the Oceanview Inn and Suites is a bit better than notch-above-scuzzy. It was clean, though the decor is a bit strange. The wall over the headboard is padded? Ok.

The hotel’s WiFi, however, was not inspirational. Consequently, the three contenders for dinner ended up being decided by who had WiFi. Only the Cucina Verona had free WiFi.

A quick ride back downtown scored me rock-star parking about twenty feet from the Cucina Verona‘s front door. After a perusal of the menu, I settled in for a nice long dinner. First came a cup of a creamy French onion soup with some warm bread. Then the plate of seafood fettuccine Alfredo arrived. All of this was washed down with a glass of Montepulciano. During all this eating, I was occasionally pausing to upload the next of my photos to the blog. This is often slow on even decent connections. At the motel, it’s crippled WiFi would have taken an eternity to upload all the photos. Since I still had photos to upload when I was done eating, I ordered a piece of carrot cake to prolong my stay (how’s that for a rationalization).

About this time, a gentleman sat down at the end of bar next to me. He didn’t order anything, but was greeted by most of the waitstaff and bartender along with several of the patrons. It turns out this gentleman was the owner of this restaurant. We had a nice long conversation about riding, tourist seasons, his restaurant business, and a possible branching out into selling some of his food ingredients (sauces and such) in a small local shop (separate from the restaurant) as well as online. Interesting gentleman.

As it was almost closing time for the restaurant (9pm) and all my photos were uploaded, I bid my adieu and made the short ride back to the hotel room to write up a post or two before bed.

Gallery of the Day’s Photos

My first view of San Francisco Bay from I80. The amusement park in the foreground is Six Flags Discovery Kingdom.

My first look at the Pacific on this trip, specifically, Bodega Bay.

The Ava Mae on Bodega Bay. (Sounds like a song lyric.)

Someone engages in some deep thought at North Salmon Creek Beach.

The coastal fog creating the hill just inland of North Salmon Creek Beach. You can see clear sky to the left.

Looking south along the Carmet coastline.

Looking down the cliff to the Carmet coastline.

Looking north along the Carmet coastline.

One man’s very own kingdom across the cover from Duncan’s Landing.

The parking lot is pretty full at Goat Rock Beach.

A tighter view south along the coast at Fort Ross State Historic Park.

The Nightowl looks north along the coast at Fort Ross State Historic Park.

A view looking south from the coast north of Manchester. The Point Arena lighthouse is visible in the far distance.

The Point Arena Lighthouse is still visible from all the way up the coast north of Manchester.

Looking north along the coast north of Manchester.

The Nightowl overlooking the coast north of Manchester.

Looking inland from the north end of the CA1 bridge over the Albion River.