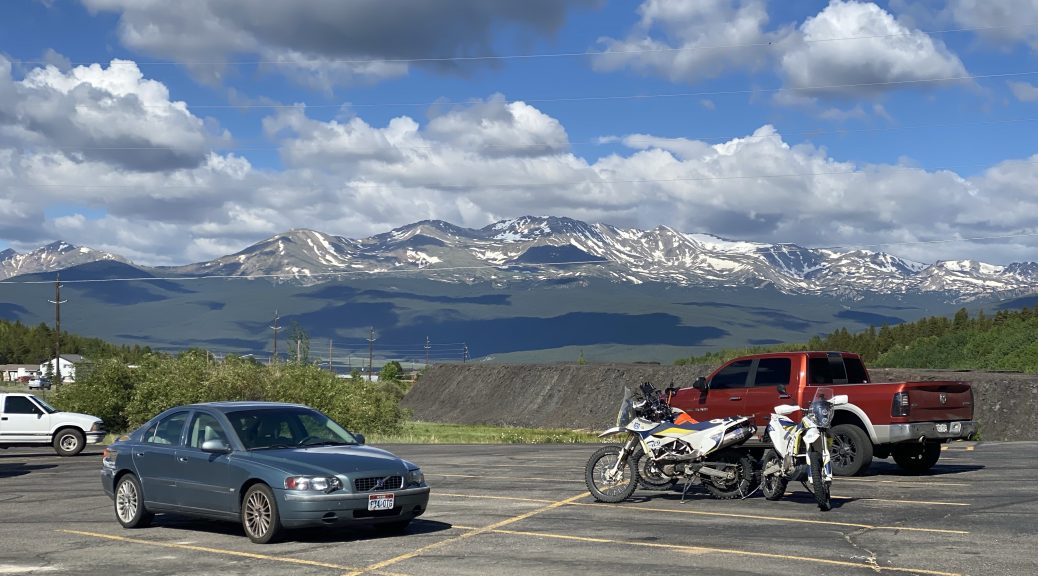 After yesterday’s two-day novella of a trip report, this one is blessedly short (foreshadowing; I lied). I leave the beauty of the Colorado Rockies behind and start to make my way home across the plains.

I was up after midnight the evening before writing up the previous two days, so I tried to sleep in a long as feasible. This plan was interrupted when work intervened for the first time this entire trip. There was an alert on one of the search clusters I administer in the US. It was spiking in CPU activity and that rarely happens. By the time I’d contacted my team lead and started to investigate, it resolved itself.

Outside it was a gorgeous day with a few puffy clouds in a brilliant blue sky and none of the rain from yesterday evening. This is, however, Leadville, which means we’re at just above 10,000 ft (3,048 m) elevation, so the inviting weather outside came with the caveat of 52º F (11.1º C) temperature.

I showered and started checking on possible routes out of the mountains.

Ugh. Not many options.

All the mountain ranges north of the I70 corridor down to the plains north of Denver had some sort of rain, or at least a forecast for rain in the next few hours.

Down where I was, in Leadville south of the I70 corridor, there was still rain in the forecast, but not until the mid afternoon. I’d be long gone by then.

Looking further east, it looked like the further I went the later the rain was developing. Since all the nice passes to check out would be drowning in rainfall, I decided to ride up to I70, head east into Denver, and then stay on the slab (I76 and I80) and start for home (Michigan). I had today (Friday), Saturday, and Sunday to get there, and that’s plenty of time.

Aside: It’s not fairly common during my westward treks to go from home to Denver in two days.

Working backward from home (Ann Arbor, Michigan), a comfortable day’s ride is from Davenport, Iowa, on the Iowa/Illinois border on the Mississippi River. That plan also allows me to have dinner at the Machine Shed restaurant the night before in Davenport. Bonus!

Working backward from there, North Platte, Nebraska was about halfway between where I was and Davenport, so my target was North Platte.

I pulled out of the hotel parking lot, dodging puddles left from yesterday’s rain, at 9:30am. A quick ride through downtown Leadville, which is completely charming, with lots of old architecture, and started down the mountain.

Colorado Highway 91 takes you past the mine that was the reason Leadville was founded. No, it wasn’t a lead mine (fooled you!), it was silver. After the mine, you descend into a valley which is the headwaters of the Arkansas River. Then you ascend the north side of that valley over the Fremont Pass, and down to Interstate highway 70.

This high-altitude stretch of road was a bit chilly, with the temperature hovering just over 50º F (10º C). For only the third time this entire trip, I had all my jacket’s vents closed and the Nightowl’s heated grips and seat turned on. When I reached I70, I knew the pass at the Eisenhower Tunnel wouldn’t be any warmer, so I pulled over to add a flannel shirt under my leather jacket.

Being a Friday (even only a Friday morning), there was already more traffic heading out of the Denver metropolitan area (90 minutes east of my current location) and fairly little traffic heading towards Denver. Consequently, the miles rolled easily.

For me, Interstate highways are a necessary evil. They help you get someplace fast, but generally aren’t all that scenic. Some of them, however, are very scenic, and I70 west of Denver is the poster child for this condition.

From the CO91 interchange, I didn’t have far to go before the ascent up the mountains to the Eisenhower Tunnel. As predicted earlier, it got a little colder going over this high pass, but my added flannel and the warm grips and seat got me through without suffering frostbite.

Through the tunnel, it’s a long downhill stretch before one final low pass to climb before the descent into Denver. During this first downhill stretch, I had a decision to make.

Since I had plenty of time to get to North Platte, I was considering taking the road up to the top of Mount Evans. I’ve had my other two bikes up that mountain, and it’s very scenic and provides a commanding view of the surrounding mountain ranges.

Unfortunately, as I approached the exit that would take me to the base of the Mount Evans road, I could see the the higher peaks in the area were shrouded in the growing number of broken clouds in the sky. Today’s view would likely be obstructed. Bummer. I’ll take the Nightowl up Mount Evans on another trip.

As you get closer to Denver, I70 adds a third lane in each direction and you have more opportunities to maneuver through traffic. With the good pace, I was down into Denver pretty quickly.

I navigated through the downtown highways and found I76 heading northeast out of Denver towards Nebraska. Before too long, I was running low on fuel (I’d last filled up in Carbondale) so I exited at Fort Morgan and decided to fuel both the Nightowl and myself. The Nightowl got it’s standard ration of 87 octane fuel (it actually should get 89, but out west, they tend to jump from 87 to 91 with nothing in between; a few tanks of this won’t hurt the Nightowl).

Upon arrival I’d noticed a Subway sub shop done the street; that’s where I ate lunch while looking north out the big picture window at the rapidly approaching storm clouds. They appeared to be headed east, perhaps a little north of east, and that’s the direction my chosen path, I76, goes.

So, how fast can you eat your lunch?

As I gobbled up my lunch, it occurred to me that I was going to arrive in my target of North Platte, at about four in the afternoon.

That’s awfully early to stop. Surely I would go further than that.

An inspection of the latest weather radar showed that I definitely could go further and the storm cells crossing my path should be out of the way by the time I get there.

Then I begin re-evaluating my get home strategy: I could get home a day early. With all the rain popping up today and tomorrow, the ride tomorrow would almost definitely have some rain in it. If I push further today, I could get through the day with little rain and leave less of the very-likely-wet travel for tomorrow.

I said likely. Back on I76 eastbound, I was in a race with the storm clouds to the north. There’s not much elevation in this part of Colorado, so it was very easy to see where the storm was dumping copious amounts of rain on the landscape. Depending on the current heading of I76, it often looked like the storm would cross before I got out in front of it. The luck (and perhaps karmic credit) was in my favor and I finally put the storm behind me as I entered Nebraska and picked up I80 and it’s more easterly heading.

As predicted, it was before 4pm when I flew past the North Platte interchanges. I would have felt like a total wimp if I’d called the day that early.

I fueled up the Nightowl in Gothenburg, Nebraska. I also used this stop to commit to my target of Des Moines by reserving a hotel room. The current estimated time of arrival in Des Moines was almost 11pm. I hope something will still be open for a late dinner.

As I continued east past Kearny and towards Lincoln, I had another close encounter with a storm cell. This one was already crossing the I80 in front of my and I was begging for it to move its ass off to the north. I ended up picking up a few large drops of rain, where each drop seemed like a shot-glass of water, but I didn’t get soaked. What I did get was plenty of road spray, which coated the front of the Nightowl with a healthy dose of road grime.

Between Lincoln and Omaha (both in Nebraska), I had two thoughts:

As I approached Omaha, I did my best to cover all the necessities for this stop to keep it as short as possible. I really didn’t want my Des Moines ETA to get later than 10:30, or the Machine Shop kitchen may be closed. I kept running the required items in my head:

I zipped through my mental checklist at the gas stop and was back one the road with a new ETA of 10:32pm.

Fortunately, the lack of traffic on the roads meant that the crossing of Iowa was fairly effortless. I could see the Des Moines ETA getting earlier every few miles I traveled.

Shortly after entering Iowa, my phone rang. It was my biker friend Ray. He seemed genuinely surprised that I was still out on the bike; he’d hoped to catch me post-ride. He didn’t want to distract me so we kept it short.

I finally pulled into the hotel parking lot in Des Moines at 10:10pm. I hadn’t been able to call the Machine Shop in Des Moines (they aren’t a contact on my smartphone), so I didn’t know when they closed on a Friday. I pulled my iPhone out of the GPS cubbyhole in the dash and quickly looked up the local Machine Shop.

They closed at 10pm.

I missed them by 10 minutes.

I checked in to the hotel and unpacked for the night. My room was the last one down a long hallway. On the bright side, I won’t have any neighboring room on one side.

I used the Yelp app to figure out what was still open at 10:30pm near my location. The only option was a Chili’s restaurant (common US chain) just a few blocks away. They looked closed when I arrived, but they would be open for another few minutes. They said they’d be happy to serve me dinner.

I ordered water, a Patron margarita, and chicken fajitas.

I drank, I dined, and I made my was back to the hotel.

Today’s route with a elevation overlay. It was basically all downhill.

I’m less than 600 miles (965 km) from home, so I’m going to make a break for it and get home with a full day to recover from my vacation. Slab all the way, which should make for another boring trip report.