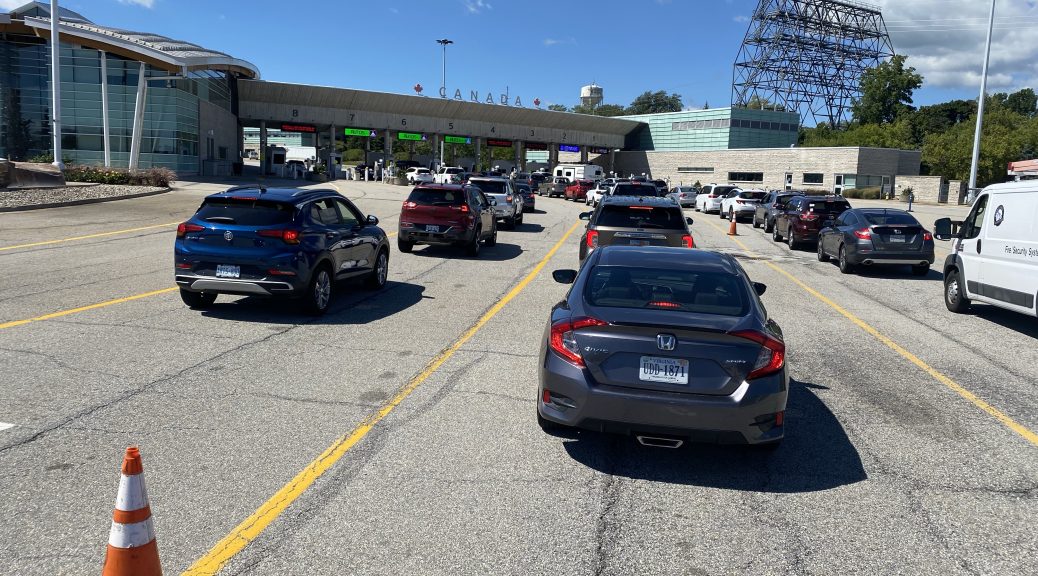 I exercise the shortcut through Canada to get from New York State to Michigan… and visit some friends along the way.

I had a mere ~260 mile ride, mostly on the New York Thruway, and a target to get to my destination between 4-5pm. Consequently, I awoke with very little urgency to get moving. This hotel cooperated with my sloth by having an 11am checkout time.

My destination was another set of biker friends that lived near Simcoe in Ontario. It was, conveniently, along my path through Canada to get back into they US in Detroit. My friends are still working, and that’s where the late afternoon arrival time came from.

As I slowly got myself ready for the day’s ride, I cleaned up, heated up and ate my leftover pizza from the previous night, and got packed. I carried the gear out to the bike, loaded it up, rode across the street for some gas, and was headed for the Thruway at 10:45am.

It was another gorgeous day, but with a fair amount of cloud cover; call it mostly sunny. The sun, on this day, did not automatically indicate warmth, as the temperature was still in the mid 60ºFs. That made my flannel a required extra layer under my jacket.

Since I was basically taking the most direct route to my destination, I set the Scenic navigation app aside for the day and reverted back to Waze. Waze wound me through a couple of small towns west of Oneida before finally finding an interchange with the New York Thruway. I had my EZPass installed under my windshield, so I rolled onto the Thruway and pointed the bike west.

There’s not much to report about slab blasting my way across New York. The traffic level was busy, but not so busy that I couldn’t maintain a good pace. So the miles rolled. As I neared Rochester (and later Buffalo), the cloud cover had diminished to just a few puffy wisps in the upper atmosphere, though this didn’t make the day any warmer.

In Buffalo, there was apparently an accident or nasty construction zone on the I90/I190 route, because Waze routed me into downtown Buffalo on highway 33, a nice little stretch off four-lane that seemed to cut right through old Buffalo neighborhoods.

Back on I190 just east of the Peace Bridge to Canada, I decided I needed to top off the Nightowl’s gas tank with cheaper US gas before the border crossing. I pulled off the highway at a downtown exit and wandered down the street looking for a gas station. Luckily, I found one a few blocks down the street.

I filled up and chatted with a couple of locals who were standing around (I think the technical term is loitering). They had questions about the Nightowl and riding in general. As seems to happen fairly often, one fella said he wanted to ride, but never got started. I told him to look up the MSF (Motorcycle Safety Foundation) and to take one of their classes. I told him they were likely be based at a local community college. He seemed less interested in this solution; he just wanted to talk about wanting to ride. 路‍♂️

I rode across the Peace Bridge and enjoyed the view of the river. You can’t see the Niagara Falls from here; the falls are a few miles downstream and around a bend. What I could see from the bridge is the expanse of cars in line to get into Canada. There were a total of six lines open. (There were two other lines open exclusively for Nexus card holders, but I don’t have one, which means I get to wait inline with rest of the unwashed masses trying to get into Canada.) I rolled the dice and picked a line, hoping it wouldn’t be the cursed line of infinite wait. It was 1:55pm.

I had brief conversations with people in other vehicles. Remember, it was a nice cool day, now about 71ºF, so people weren’t necessarily locked in their vehicles like air-conditioned cocoons; some actually had the windows down. One woman had her stereo up and her windows down. The music was, I guess, East Indian dance/rock. I confess that I found myself rocking the Nightowl back and forth to the beat. I decided that, I could, if the need arise, dance to this kind of music.

My line to the border inspector ended up being the second-slowest. The inspector looked hung over, red-eyed and miserable. He asked the typical question, lingering on the gun and alcohol question, which seems typical behavior or us bikers. He couldn’t find anything he didn’t like about me, and waved me through.

I expected to ride down the coastal highway 3 to Simcoe, but Waze decided (for whatever reason) that this was a bad idea. I got routed further north before winding my way down back roads until I reached my friends old Victorian farm house.

I spent the evening hanging out with my friends in their busy, revolving door, household. I enjoyed their company and the interaction with the ever-changing collection of pets that were available for petting and play. This place is always fun.

Here’s the very boring map of the day’s ride, with a similarly boring altitude overlay.

There’s no interactive map for the day since I wasn’t using Scenic.

Ride home. Cross back into the US at Detroit. Trip over.