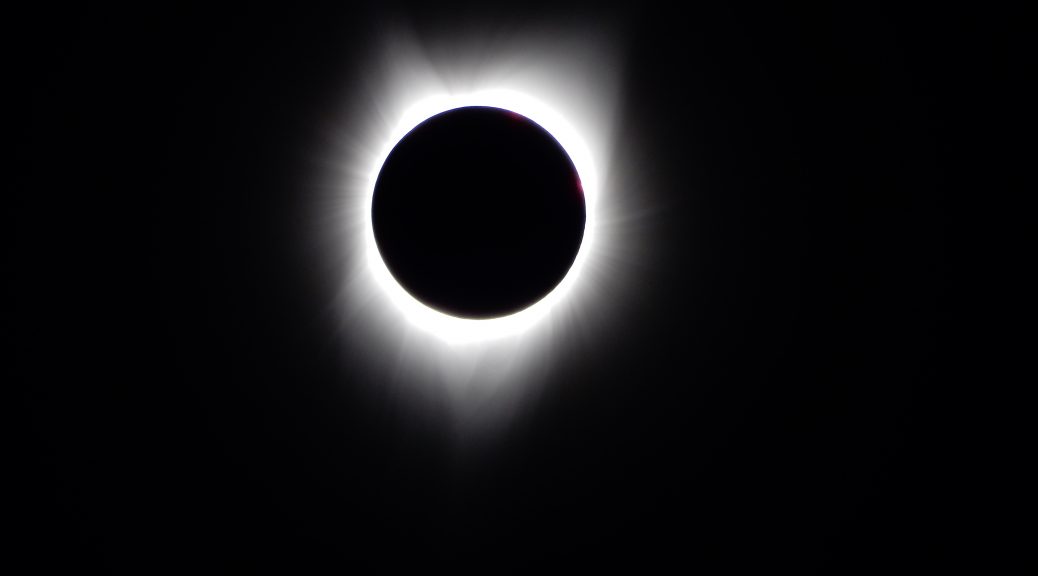 This post isn’t as much about riding as it is about viewing something that you don’t see more than once (or twice) in a lifetime.

I decided that the Hot Springs campground in the Boise National Forest was as good a place to view the solar eclipse as any. I had a good campsite and was already informed that I’d be welcome to stay for a second night. The road into this area were busier than usual, but not crazy. I did, however, expect them to get a lot crazier immediately after the eclipse as viewers beat feet for home. I’d been eyeing the ridge behind my tent as a possible place to get a good view of the river valley below.

The predicted time for the start of totality was about 11:30am. So I packed a bag for the climb up the ridge:

The climb itself totally sucked.

It may not look it, but the grade up the ridge behind my campsite was steep. Just to make things interesting, the ground was coarse sand covered in dry grass and pine needles, which made for uneven footing the whole way up. I’m sure that not being in the best of physical shape made things worse too. Oh, and I was also about 4,000ft above my home elevation. Like I said, the climb sucked.

The view from the ridge, however, was pretty damn good, so I deemed the effort as worth it.

I found a spot that gave me a clear view to the southeast into the river valley, a view that wasn’t blocked by the tops of the trees. The ridge continued to higher elevations, but it looked like it was more tree covered in those locations, so I stayed put and set up the cameras.

I put the iPhone on one tripod and the Nikon on the other. I made sure to turn off the Auto-lock feature on the iPhone so it could take a long time-lapse. I also turned down the screen brightness in hopes the the power savings would allow the iPhone to be on for the complete eclipse event, which was one hour before totality to about one hour after totality.

My eclipse vantage point, looking down towards the Hot Springs campground.

My eclipse vantage point, looking up the ridge.

Camera set for eclipse. The iPhone will take a time-lapse. The Nikon will photograph the sun. A sleeve from my flannel covers the lens between shots.

Soon enough, I donned my solar glasses and saw the first nibble of the moon out of the sun’s disk. I started the time-lapse and started my repeated process of shooting the sun with the Nikon about every 6-10 minutes. I hadn’t had time to fashion an adapter for a proper solar filter so it would work on the Nikon, so I resorted to holding one lens of my solar glasses in front of the camera lens to take shots. I always shot with a two-second timer to help eliminate camera movement, which was especially important as some of the longer exposures at full 30x zoom. Between shots, I hung one of the sleeves of my flannel over the camera lens to protect the sensor.

Over the next two hours, this process repeated many times. The following is the result.

First nibble of the moon over the waning sun, solar filter installed.

During the eclipse, I used the Canon to capture a few shots of the surrounding landscape as the light changed.

My eclipse vantage point, looking towards Garden Valley at about half eclipse.

My eclipse vantage point, looking east at about half eclipse.

I was very happy with the direct shots of the sun. When I get home I’ll pick the best of them and create a composite of the different sun phases (waning and waxing) with a shot of the corona in the middle.

The time lapse was disappointing. The camera software (stock iPhone Camera app) compressed the entire two-hour (almost) duration to about 36 seconds, which meant that you have long stretches of nearly no change with about two seconds of real activity in the middle.

In hindsight, I should have run a time-lapse of the first 50 minutes of the eclipse, a second one for just the five minutes before and after totality, and a third for the 50 minutes after the eclipse. Then I could have stitched them together with iMovie and had a much more interesting result.

The Remains of the Day

I hadn’t even packed up my equipment for the climb (slide?) down the ridge to my campsite when I heard the migration of people begin. By the time I was back in camp, half of the campers had left and the Banks-Lowman Highway in front of the campground was filling with cars. It wasn’t stop-and-go traffic like a metropolitan rush hour, but long lines off 30-50 cars stuck behind one slow vehicle. Then a minute break, then another line of cars.

I was happy to stay put for the rest of the day.

It was early afternoon now and I was hungry, so I geared up and rode the four miles back to Garden Valley to the Chevron station to have lunch at the Subway there. This was also the only place I could get a reliable cell signal for communication with the outside world. I sent Karen a few photos from the eclipse session, ate, and picked up some snack food for the evening.

Back at camp, I noticed that siesta mode had fallen over the campers; nearly everybody was asleep in the shady spots, taking shelter from the mid-day heat. I used the opportunity to take some photos of the campground.

Afternoon siesta time at the Hot Springs campground in the Boise National Forest.

Afternoon siesta time at the Hot Springs campground in the Boise National Forest.

I became acutely aware that I hadn’t had a proper shower in four days. I put on my bathing suit, crossed the road to the hot springs and the South Fork of the Payette River. The river and the hot spring pool offered both extremes for a bathing experience: the river was ice cold, the hot springs were piping hot. I went for the river to freshen up. I nearly got frostbite, but felt a whole lot cleaner after the fact. Emerging from the cold river, I took a quite dip in the hot spring pool, but just enough to stop shivering. Then it was time to dry off and head back to camp.

I did my best to cue up a few offline trip report posts. I would need to be online to add photos to them and get them posted, but I could at least get the writing out of the way.

As the sun set, I headed back to the Chevron to get a connection. I incorporated photos into the trip reports I’d written and got them posted. I also called Karen, who was confused as to why my Where is Ghost? map wasn’t updating today. I picked up a single can of Mike’s Hard Black Cherry Lemonade to wash down the snacks I had back at the campsite.

By the time I got back to camp, it was dark and everybody had gone to bed. They’d even poured water on the fire so I retired to the tent to look at my Rand McNally map app (maps are all offline) on my iPad while I drank my Mike’s and munched.

The direct route home is to head south to I86, use US30 (and other roads) to cross over to I80 in western Wyoming, and slab it the rest of the way home.

I want to cross the rest of the mountains in Idaho and take a quick ride by the Tetons in Wyoming, followed by a ride along the Wind River range. I would take US20 across Nebraska, but the Nightowl may need some service (oil change and final drive fluid change), so I’ll probably end up on I80 somewhere in central Nebraska.