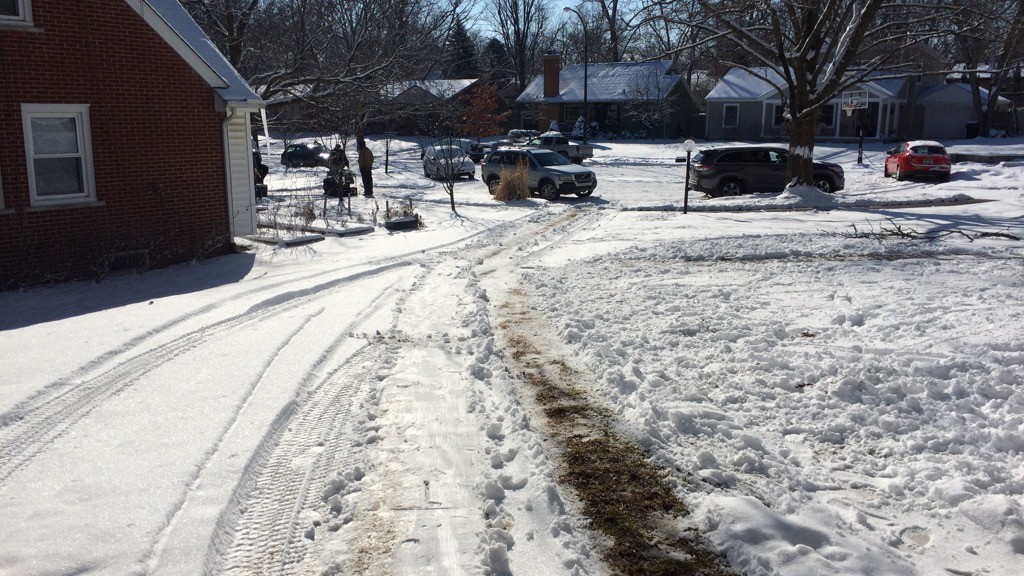 The annual Daytona Bike Week has historically been held the first full week of March. This may be a nice time of the year for Floridians and those who live along the Gulf Coast, but in the northern states, it’s still winter.

Consequently, my decision whether or not to attend this event is often made for me by mother nature, and she and I don’t always agree.

Take this year as an example. The weather in Florida is already gorgeous. The precipitation along the southern passes through the Appalachian Mountains is most often rain instead of snow. At first glance, it looks like I have a non-snow-molested path to the world’s biggest biker beach party.

Then I look out my front window.

Last night, mother nature added 2-3 inches of fresh snow to the winter wonderland landscape. The main streets in town are clear and the highways are dry and clear. However, for the 1/4-mile out my driveway and down my street to the closest clear street, would have to navigate hard-pack snow. While traversing this stretch is trivial on in a car (or a bike with a  sidecar), it is seriously fraught with uncertainty and pucker-factor on a big touring bike (Nightowl).

Today is Friday. The forecast high temperatures for Saturday, Sunday, and Monday are 36ºF, 42ºF, and 55ºF (or 2ºC, 6ºC, and 13ºC), respectively. All I have to do is exercise some patience and leave a day later and the fresh coating of snow will melt away and I won’t need a snowmobile to get to the end of my street. Problem solved, right?

Here’s where mother nature takes the knife the inserted in my back and twists it a bit.

Tomorrow morning, before the temperature crests the freezing point, we’re getting more snow, currently forecast for another 1-3 inches. That doesn’t sound like a nice riding day to me, so if I don’t venture out today, I’m stuck waiting until a total of 3-6 inches of snow melts away in the 55ºF (13ºC) temperatures on Monday.

So, I brave the ride out of town today, or I lose two-and-a-half days of travel.

You hear that cackle in the background. That’s mother nature rolling on the floor laughing.

Hook up the Trailer?

Here’s my philosophy on trailering bikes.

If you have the physical capability to ride a bike from point A to point B, why trailer? I have good friends that I respect that have trailered their bikes cross-country so they can take local rides for a few days with a group of friends. If they don’t trailer, they don’t go, and I’d much rather that they go and have fun.

I’m don’t have any health issues that prevent me from taking this trip  and it seriously fries my balls that (in this case) all I would need is a tow to the closest main road.

Nope. I’m going to be stubborn. If I go, I’m damn well going to ride.

Right about now, my readers are thinking, “Daytona Bike Week is an annual rally. You can go next year.”

Given the financial bookkeeping predilections of my company, our vacation time corresponds to the company fiscal year, which ends on March 31st. Consequently, Daytona Bike Week falls towards the extreme end of my vacation planning for a given year. I don’t always have the will power to say no to other rides that come earlier so years where I have enough vacation time to do Daytona are few and far between.

Another factor is the event itself. Big biker rallies like Daytona and Sturgis are fun but I tire of them quickly. Yes, I do enjoy meeting with vendors that I like (assuming they’re there). Yes, I do like wandering the booths of hand-crafted farkles. Yes, I do enjoy the people watching and bike watching.

Unfortunately, after a while, I’ve seen a lot of the same mass produced junk offered in 50 different booths. I’ve uttered “pardon me” and “excuse me” 13,783 times while working my way through the crowds. The ride into the event was 90 minutes of stop-n-go traffic.

I’ve been to the Sturgis rally several times but I spend, at most, half a day on Main Street. The rest of the time, I’m out riding around the surrounding area with friends. That’s what makes Sturgis more palatable to me: there are dozens of nice features spread out over hundreds of square miles of countryside. This serves to reduce the maximum crowd density at any one park, venue, concert, monument, etc.

As a result, my desire to visit Daytona has much more to do with the group of friends that I know are congregating at various households in the northern Florida area. For some of these friends, this will be the only time I will likely see them this year.

I have the vacation time. I have a working bike (actually, three at the moment). I have friends to see and good southern roads to travel to get there.

That’s why I don’t want mother fucking nature to take a big steaming dump on my departure strategy.

I need to run a few errands before I leave. That will give me another chance to get out on the surface streets and see just what kind of trouble I could be getting into. That will also give the bright sunshine some time to melt off as much as possible.

If I think I can get to the end of the street without dumping my nice new bike. I’m out of here, even if I have to ride two blocks on the damn sidewalk.