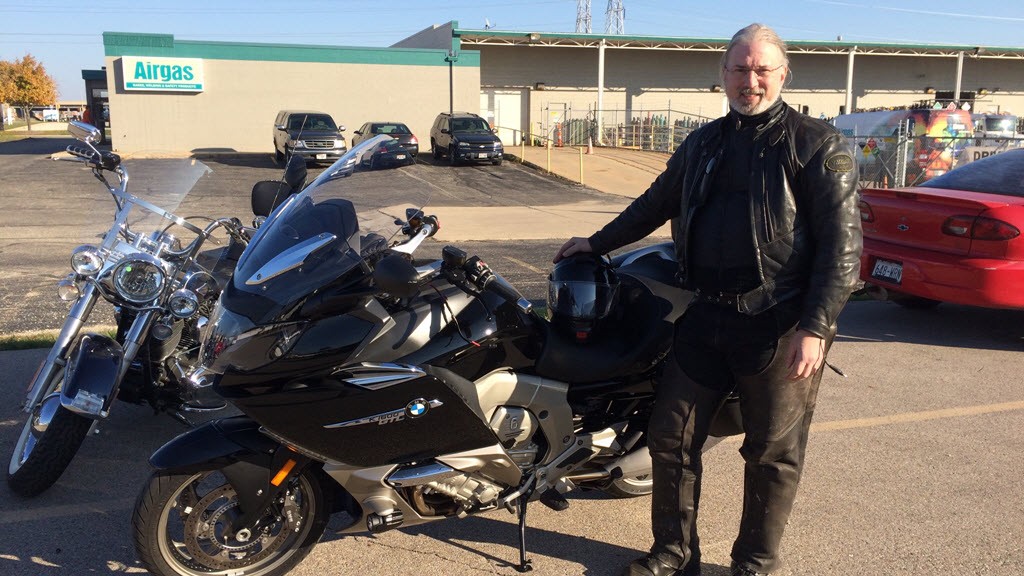 Since I ended up buying the Nightowl, my new 2015 BMW K1600GTL, from a dealer in another state, there were a few additional challenges when it came time to close the deal and bring the bike home:

After researching various modes of transportation (air, train, one-way car rental), I decided to fly out to Milwaukee on a Tuesday morning, pick up the bike, and ride it back the same afternoon and evening. The available flight times conflicted with the time when Karen had to drop off Jessica at school, so I was going to have to find my own ride to the airport. It was going to be a long day.

The only thing more depressing than the buzzing of the alarm is the sound of the rain on the skylight in our bedroom. I had already planned (naturally) to take a rainsuit with me to have on board for the ride home. Now it looked like I had to break it out just to walk to the AirRide, the bus that would ferry me from downtown Ann Arbor to the Detroit – Wayne County Metropolitan Airport (otherwise known as Metro or DTW).

Wearing my rainsuit top, I hoist my duffelbag filled with helmet and other required riding gear up on my shoulder, and start the 20-block walk downtown. It’s pitch dark and rain is not a downpour but steady and I can see my breath in the pre-twilight air. At least it’s not windy.

The roads are bare and the houses are dark. Nothing but the sound of my boots clomping on the sidewalk, boot strap chains softly jingling as I walk.

I check the time; I need to pick up the pace.

Caught the bus to the airport with three minutes to spare. There’s only eight of us on the bus, so I have plenty of room to lay out the clothing that got wet, partially from walking downtown through a steady rain and partially from jogging the last three blocks (uphill) because I was coming dangerously close to missing the bus.

6:23am ET
Arrive at DTW Airport

The ride to the airport went off without a hitch. I was able to promptly pass through security and find the departure gate for my flight to Chicago.

The food stands are just beginning to open. I elect to wait until my layover in Chicago to grab a bite.

The flight to Chicago (O’Hare) is complete and landed on time. The omnipresent cloud cover broke over Lake Michigan. I spotted a Great Lakes freighter heading northbound in the calm waters below.

About the time we hit the west coast of Lake Michigan, I noticed another plane on a near-parallel heading about five miles south of us. As the sun silhouetted the Chicago skyline through the haze, the plane to the south kept getting closer. We ended up landing on parallel runways at O’Hare, with our doppelgänger’s wheels touching down about 10 seconds before ours.

The best I could do with the flights left a 1- or 2-hour layover at O’Hare. This left me plenty of time to walk from Concourse B to Concourse F and find a Pizzeria Uno with a few personal pizzas already made.

Breakfast of champions. (Yes, it’s only 8am local time but I’ve been on the go for four hours already; this qualifies as lunch. )

I’ve got another hour before my flight. Lots of time to eat my food and read my K1600GTL Riding Manual, which I have installed as a PDF on my phone.

9:59am CT
United 5292 to General Mitchell Airport in Milwaukee

At first, it appeared that we were leaving on time. With the little CRJ200 regional jet absolutely filled to the gills, they closed the door, pulled pack the jetway, and we proceeded to sit for another 15 minutes before we finally pushed back from the gate. We then waited in a long line of aircraft at the runway.

The overall result: the flight arrived in Milwaukee about 20 minutes late.

11:42am CT
Rhett drives me from Mitchell to Schlossman

Rhett, my salesperson from Schlossman Motorcycles of Milwaukee, picks me up at the airport and gives me a ride to the dealership.

2019 Update: Schlossman shut down in late 2019. The only details I could find were that the owners of this dealership and several auto dealerships were retiring and handing the reins to their children, but the kids didn’t want the motorcycle dealership, only the car dealerships. Their Triumph franchise was picked up by another motorcycle dealer. The BMW franchise was picked up by another party and they  built a new facility to house it, now known as MotoUnion. They sell and service Ducati, MV Agusta, Royal Enfield, and BMW motorcycles.

After the customary introductions to the Dan the sales manager, Chuck the parts manager, and Cat the finance specialist, I get my first look at my new ride. It’s in the warehouse out back and still dripping water from the bath it received earlier today. A cursory check of the bike reveals that the odd scratches and scuffs revealed in the initial dealer photos of this demo bike were not nearly as bad as I thought.

Then it was off to the parts desk to retrieve the goodies I had purchased with the bike:

I didn’t have the dealer install any of these items, preferring to do the install myself. There’s one piece, the iPhone adapter, that hadn’t arrived yet. They’ll have to ship it to me later. I grab the rest of the goodies and pack them in the top case on the bike.

Then I’m escorted to the finance specialist’s office to sign my life away. Cat, the finance specialist, and I find that we have plenty to talk about. Consequently, a contract signing that could have taken as little as 15 minutes ends up taking 45. I shrug it off since it’s still early enough for me to beat the rush hour around Chicago.

I leave Cat’s office to find the sales manager Dan asking if I’ve had lunch. I explain that I appreciate the offer but I wanted to eat after I was safely past the Chicago rush hour. He explains that they discovered that my bike never had its 600-mile run-in service (or it wasn’t recorded in the system). The run-in service is basically a engine oil and final drive fluid change, so it should be done by the time we get back from a quick bite. I definitely want the service done, so I agree to the free lunch.

It turns out that Dan and I had plenty to talk about too. We munched our chicken sandwiches and swapped stories about riding bikes, selling bikes, and wrenching on bikes. About the time we’re finishing lunch we get a call from back at the dealership reporting that they can’t find the key for my bike. I retrieve it from my jacket pocket and hold it up. Apparently they need it to complete the service. We hurry back to the dealer.

I hand off the key and a few of us sit down to swap more stories while the tech completes the service. I manage to get a free dealer t-shirt added to the day’s haul.

After a series of delays, some frivolous, some required, I finally get to ride my new toy home. It’s still a nice bright sunny afternoon but the sun is moving off to the west and shadows are beginning to lengthen. In another two hours, the sun will set, the temperatures will drop, and my ride will get a lot chillier.

I’ll be getting only my second ride on this model of bike (and first ride on this specific unit), through the 3rd-most populous metropolitan area in the country, during rush hour, in the dark. <shrug> At least I’ll have plenty of nighttime riding miles to test that new adaptive headlight.

I don’t even get out of the parking lot before I’m reminded that my new bike is not a Harley. Slow-speed maneuvers on the K1600 require a subtle touch on the throttle. As you increase or decrease the throttle position, the motor responds like an electric motor; it’s nearly instantaneous. I’ve got a few turns to get out of the parking lot and onto the nearest highway and that’s enough to get a better feel for the insanely quick throttle response.

One feature that I’ve added to both the Cruiser and the Vector is an on-board heated gear controller. I like to install these permanently so I have a convenient place to plug in and a well-thought-out location for the temperature control. Naturally, since I’ve barely owned this bike two hours, I don’t have a heated gear controller installed yet. I do, however still have my heated gear and an cobbled-together adapter from my salesperson Rhett so I can hook up my Gerbing gear’s coax connector to the power port on the K1600. The good news is that the heated gear will keep me from going into hypothermia on the way home. The bad news is that the lack of a controller means that I’ll only have two available settings for the heated gear temperature: freeze (off) and char-broil (on). As night falls, the temperature will drop enough that I’ll probably need the gear on full blast anyway, so I’m not overly worried about this.

My route through Chicago involves about 30 miles on the Tri-State Tollway and that means stopping to pay tolls (I don’t have the sensor puck). This is where I remembered to use one of the nifty electronic features on this bike. The first toll booth is on a slight slope, so the bike wants to roll while you have both feet on the ground, engine running, in neutral. Remembering my K1600GTL Riding Manual reading from earlier in the day, I come to a full stop, give the front brake lever a good hard pull, and release it. Sure enough, the little HC icon lights up on the dash and the hill control feature engages. This feature automatically holds the rear brake for you until you pull away from a stop at which point it automatically releases. It was, no doubt, originally designed to help novice riders deal with uphill starts on a steep grade but I found that my application worked too.

I made it to the Edens Expressway on the north side of Chicago before the traffic volumes started to go nuts and the pace eventually dropped down to stop-and-go. From the Edens to the Kennedy, on the the Dan Ryan, I had plenty of opportunity to get thoroughly indoctrinated into the K1600’s tendencies with regard to slow speed maneuvering and balance. Finally, when I reached the Bishop Ford expressway, the congestion lightened up and I finally got back into top gear.

Finally home. It took forever to get around Chicago since I started almost three hours later than planned. Temperatures got down to 42°F for the last 70 miles or so. I will be proceeding directly to the hot tub to warm up. It took a rather full day, but the new toy is home.

In a word: wow. This thing devours miles.

One thought on “Bike Buy Journey: Bringing the Nightowl Home”