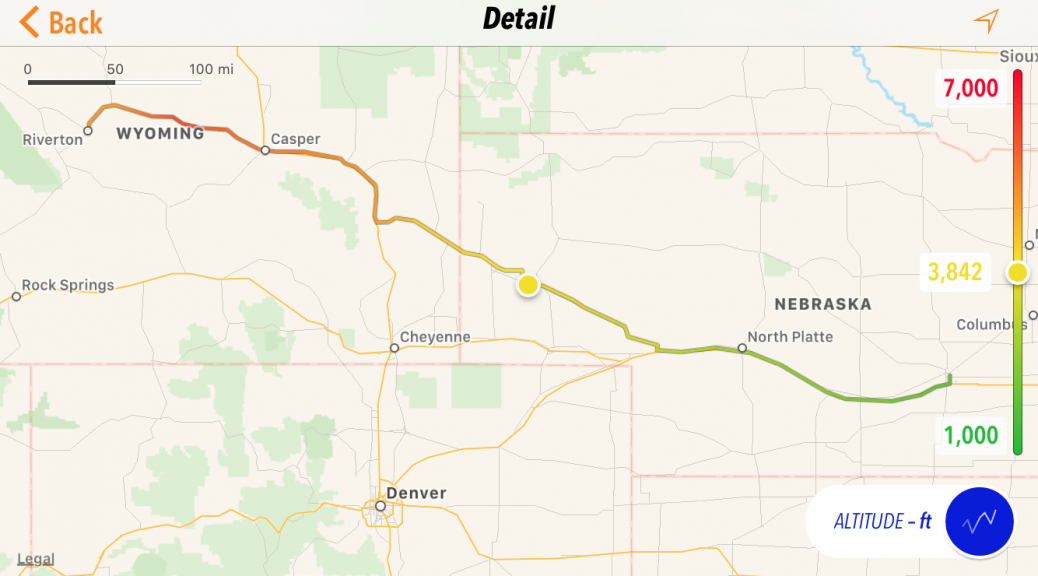 Today was sunny and hot, which made riding with full gear a serious challenge.

I originally wanted to ride back roads all the way to Iowa (aside from a hard-to-avoid stretch of I25 east of Casper). This would have meant taking US20 across most of northern Nebraska.

This plan was in conflict with my need to do a 12k mile service on the Nightowl. It wasn’t quite to the point that I needed an oil change but I was getting significantly overdue for the rear drive fluid change (that’s the hub at the end of the shaft drive at the rear wheel). I had packed a replacement oil filter and brake pads in anticipation of possibly needing them this trip. The actual engine oil I use is Rotella T6 and that is available at any Walmart, so that shouldn’t be hard to find. The final drive fluid, however, was only at BMW Motorcycle dealers. I had been using Amsoil Severe Gear 75W-140, which is a very acceptable substitute, but that is only available at Amsoil dealers, and they’re harder to find in small towns.

I decided that, if I wanted to make the 12k service a real possibility, I needed to travel along a more established (and populated) route. That meant I80. But that didn’t mean I had to get on I80 at my first opportunity.

I would take back roads and the aforementioned near-mandatory stretch of I25 until I reached I80 in Oglalla, Nebraska.

The day started fine, albeit a little later than expected. I had foolishly stayed up the previous evening trying to catch up on trip reports until 2am. That resulted in a later-than-normal wake-up time and by the time I’d caught a quick breakfast and a quick shower, I wasn’t actually pulling out of the hotel parking lot until almost 10:30am.

The good news is that the first 100+ miles on US26, out in the wide open lands of central Wyoming where the pace on the highway is quick. This area isn’t exactly scenic. I’d compare it to US50 across Nevada. If you like wide open isolation, then the beginning of today’s ride is right up your alley. If you find that kind of thing boring, then you need to make sure you have some good music playing on the stereo.

I actually like the barren expanses and I had good music to listen to.

A lot of the small towns along this route have similarly small Mom-n-Pop diners or campgrounds or hotels that are shuttered up. I can’t help but wonder if, in this electronically connected age, people can much easily look ahead and know exactly what’s available another 10, 20, or 50 miles down the road. I wonder if some of these places survived because people rolled into these tiny bergs late in the day and decided to stop because they had know way of knowing when the next opportunity would present itself.

This is the stuff you ponder when crossing the more desolate expanses of the American west.

By the time I hit Casper, WY, it had been over 90F for over an hour. I already had the vents open on my Vanson jacket and even had the sleeves unzipped to allow some air flow up into the jacket. This is one of the (many) downsides to allowing myself to turn into a bit of a lard ball: there’s not as much room inside the jacket for air to circulate.

The pace was even faster on I25 and when the road turned south around Orin, the added headwind helped keep me from tearing off my leathers. I’d been drinking some, but probably not enough.

I got off the interstate when US26 split off to the east. There’s no gas directly off the interstate but there is gas 17 miles to the east in Guernsey, WY. I stopped there for gas, some fluids for myself, and a quick bite to eat. There was a pizza stand in the convenience store so I had a small one.

Getting back on the bike to leave I made my biggest mistake of the day. I remembered at the last minute that I needed to check and possibly refill my water supply. But I was already suited up with the Nightowl running, so when I felt some water in the Camelback, I decided to just go.

One of the cool things about this stretch of US26 is that it follows the path of the the Burlington Northern Santa Fe (BNSF) and Union Pacific (UP) railroads. You see a lot of rail traffic along this road.

The downside to this stretch is that there are a lot of small towns that slow you down and, without the breeze of cruising speed, heat you up.

I was already cooked pretty well when I reached the Nebraska border. Shortly thereafter, in Morrill, there was an accident in front of me that blocked the entire road, which is saying something since it was a four-lane divided highway here. Most of the locals in their pickup trucks were riding down into the shallow ditch of the median and continuing around the wreck. I really didn’t want to test the offroad capabilities of the Nightowl in knee-high grass at 1 mph. Luckily, I was able to skirt by on the edge of the shoulder and was on my way. (It didn’t look like anyone was seriously injured, but both cars involved were totaled.)

East of Bridgeport, NE, I started to get go fever in an effort to get to Ogallala and interstate beyond it. Unfortunately, I’d set up Waze to navigate me to Lincoln, which was dumb because I had no intention of traveling that far. The point is that I didn’t realize it was still another 90 minutes to Ogallala when I sucked the last of my water out of my Camelback.

By the time I finally reached Ogallala, I was overheated and more than a little dehydrated. I sucked down a 20oz bottle of Gatorade in a few minutes and followed it up with a frozen Heath Bar just because it was cold and cold sounded good. I also filled up my Camelback with ice water from the convenience store fountain.

When I pulled out of the gas station, I noticed that the bike was no longer wandering around at slow speeds like the tires were wearing funny. I guess it was me and not the bike.

The Push to End the Day

With a full tank gas and sufficiently cooled off and re-hydrated, I went about the business of adding another couple hundred miles to the day. Well, almost 200; more like 180.

The sun was setting now so the heat was becoming less and less of an issue. The speed limit is 70mph so you go almost 80mph (or more) and by 30 minutes after sunset, it’s mostly truckers left on the road.

In a nutshell, I made good time.

I had picked out a hotel in Grand Island that happened to be about four blocks away from a Walmart. That could come in handy if I wanted to do an oil change towards the beginning of the day tomorrow. I pulled into the hotel parking lot just after 10pm, bringing the total miles for the day up to 604. As much as it was a fairly long and hot day, it was probably worth it since it set up an easy day tomorrow to get to Davenport, IA, which was a good goal since that would set up an even easier day to get my ass home… the evening before I jump on a plane to work a week in Austria.