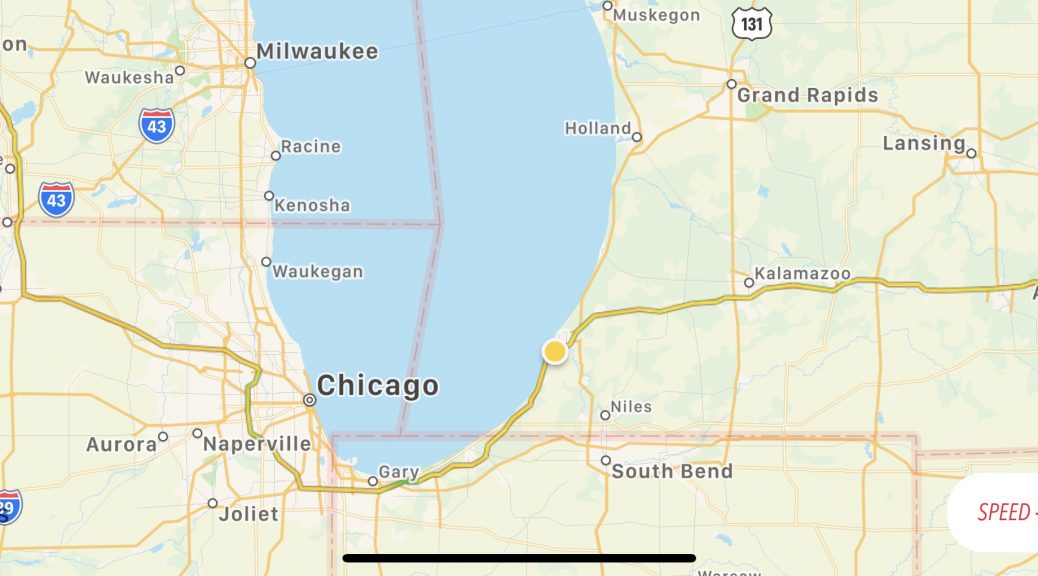 I’m already leaving a day later than intended and I’m not feeling my best. I’m just going to start down the road and see what happens. What could go wrong?

Note: For reasons that will become evident (read on), I’m already three days behind on these posts. Consequently, these are uncharacteristically brief.

The last Snarl Par-Tay that I attended was the one in the summer after his death in 2018. Snarl’s wife, Jeanne, has kept the party going, and it’s high time that I showed my ugly face at the festivities.

This trip totally snuck up on me. I’ve been busy at work and catching up on some overdue vehicle maintenance, including a last-minute 18K service (the dreaded valve clearance check) on the Nightowl. When it was all said and done, I was up until almost 3am seeing after a few last minute details Thursday night, still planning to do my usual modus operandi of leaving after work on Friday and getting a few hundred miles in.

Well, Friday night came… and I was tired and in no hurry. I decided to have another dinner with Karen and get on the road Saturday morning.

When I woke up on Saturday, I knew something was off.

Note: If you fear too much information about Ghost’s health, just go on to day two.

Most humans would have registered my feeling as constipation, but being a Crohn’s disease sufferer, I suspected that it could be something worse. Still, it felt like something that would pass if I got up and started moving around, so I started gathering myself for the journey.

I ended up (perhaps unconsciously) postponing my departure as if I was waiting for my body to sort itself out. By the time it was nearing 11am, I finally said “fuck it” and put on my leathers, mounted the Nightowl, and got my ass down the road.

I’d played around with the idea of a northerly route out west along US2, starting from the upper peninsula of Michigan. Since I didn’t get that Friday-night-head-start as originally planned, I bailed on that idea and reverted to my usual strategy of getting to the mountains as fast as possible and then seeking interesting routes. That mean slab-blasting through the plains, which starts with I94 west.

With the exception of a few one-lane construction zones along I94 in Michigan, the ride was going well. The heat and humidity of the last several days had broken and today was still warm, but nowhere near as humid. I didn’t even open up the vents and sleeves on my jacket until I got into Illinois.

I did have Waze divert me onto US20, which parallels I90/I94 around the south side of Lake Michigan, to avoid a construction slowdown. I used the detour as a opportunity to fill the Nightowl’s tank in Chesterton, Indiana.

It was during the fuel stop that I began to suspect that my intestinal discomfort was more complicated than I thought.

Those of you who’ve ridden with me in the past may remember times where I’m not feeling well and use breaks in the trip to lie on the ground in weird positions like some demented yoga student. Such antics are really my strategy to relieve the pressure building up from a partial intestinal blockage, an affliction that I am prone to due to suffering from Crohn’s disease.

I successfully navigated my way around Chicago and made it into Wisconsin on I90 before the four-letter messages from my intestinal tract were becoming unbearable.

I found a truck stop south of Madison, Wisconsin and pulled off the highway. I was lucky to locate a shady spot that wasn’t in the main pedestrian traffic pattern in and out of the convenience store. There I did my horizontal contortions, hoping to find some relief.

I decided the only option was to get off the road, find quiet air-conditioned shelter, and wait it out. A quick hotel search on my phone located a reasonably priced room (rare for anything in central Wisconsin; can you say “Wisconsin Dells”), in the town of Stoughton. It was only 15 miles away.

I pulled myself together and managed to pilot the Nightowl to the hotel. My day ended at 5pm and only 378 miles into the trip.

Within a few hours, the body did it’s own version of an intestinal reboot. In short, what didn’t go down came back up. This relieved enough pressure that I was actually able to rest. By 9pm I was able to start drinking water again (and keeping it). From this point, I knew the drill for controlling the partial blockage. Drink nothing but water, and only small amounts at a time, waiting until things begin to move again. Then start introducing food.

Here the rather short map of the day’s ride. Note that the delays in downtown Chicago forced me to take the I294 bypass. Blech.

So, before everybody comments about my suckiest ride report ever, welcome to reality. A lot of us in the riding community suffer from one affliction or another and sometimes that affliction (whatever it is) drops a nice big hand grenade into our carefully planned motorcycle tour, sending everything sideways. When this happens, there’s logistical carnage, yes, but it doesn’t have to end the trip. You simply take that next step.

I only post this because someone may read it who thinks they can’t ride because of (fill in the blank here). I know people who ride who have a lot bigger challenges than Crohn’s disease. I’m talking about paralysis, amputation, cancer, kidney failure, etc. Compared to them, I’m a whiny bitch.